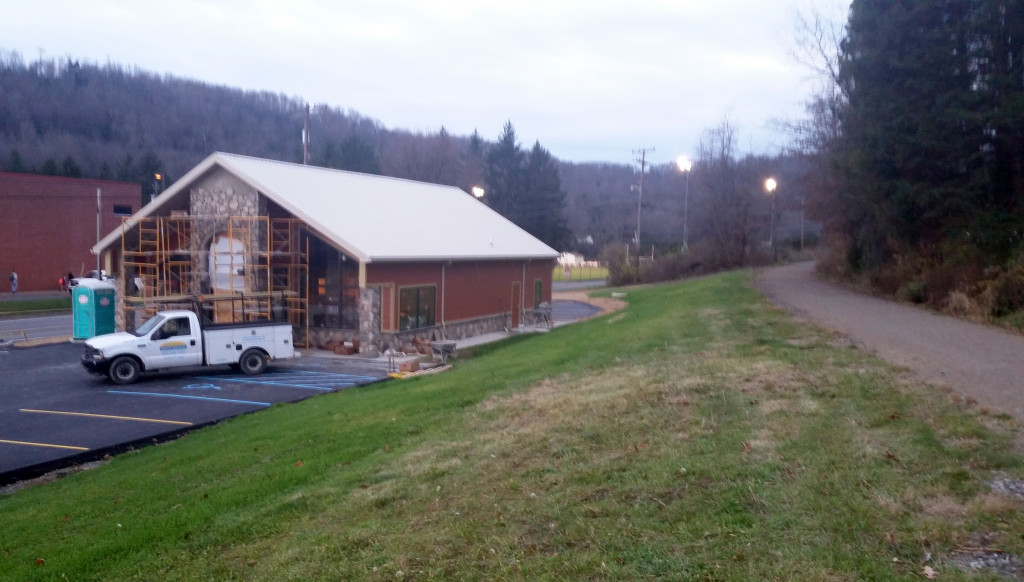 A new Subway opening in New Bethlehem is being eyed as a case study to include in a new edition of the PA Wilds Design Guide for Community Character Stewardship slated to be published this summer.

The Design Guide is an award-winning voluntary planning document in use by local governments, developers, architects and small business owners around the Pennsylvania Wilds. It illustrates ways communities can protect and enhance their character as they grow.

Ta Enos, director of the PA Wilds Center, the regional nonprofit that distributes the Design Guide, said the new Subway is a great example of how a chain can build in a context-sensitive way to fit the landscape. The store is being built a few feet from the popular Redbank Valley Trail, which the PA Dept. of Conservation & Natural Resources named ‘PA Trail of the Year’ in 2014.

Tim Murray, who owns the store and seven others in Armstrong and Clarion counties, said his new location is much different than traditional stores with an open ceiling plan, shake shingles to give it a rustic look, and solar panels on the roof. The building’s stone siding was sourced locally, he added, as were the construction crews. A keystone hangs over the store’s entrance. Murray said he is also planning to do outdoor seating to court cyclists and walkers who use the Redbank Valley Trail, and also wants to do interpretive signage that explains how the trail is part of the larger outdoor recreation destination of the Pennsylvania Wilds.

“We love to see businesses building to fit the landscape like this,” Enos said. “Too often we see chains do the minimum in terms of design – a cement box or something along those lines. Communities can ask for something more inspired, and often times will get it if they do. As Murray has demonstrated, business owners can also spearhead more inspired designs. And it makes business sense to do so: no doubt he is going to have more trail customers because he did.”

The grand opening for the new Subway, located across from Redbank Valley High School on Route 28 near New Bethlehem, will be held Sat., Feb. 6 at 10 a.m. The public is invited to attend.

Enos said the PA Wilds Planning Team, which is spearheading the update to the Design Guide, has collected photos of the new Subway for possible inclusion in the 2nd Edition. The 1st Edition can be downloaded for free at www.pawildscenter.org.

“It’s a great example of context-sensitive design along a trail corridor,” Enos said. “Not to mention a great example of tying into local tourism assets, use of the Pennsylvania Wilds brand, sourcing local – just a lot of things our regional brand stands for. Tim has done a great job.”

Murray said the PA Wilds Center is not the only one looking at his new building as a case study. “Subway is also very interested in this design as it is my own and may encourage other owners to blend in with their communities and surroundings,” Murray said.