HARRISBURG – A reception for the Creative Makers of the Pennsylvania Wilds – A Traveling Public Art Show on March 27 provided an opportunity for state officials to celebrate rural creative makers and the impact they have on the Commonwealth’s culture and economy. It was also a time to recognize the inclusion of the Wilds Cooperative of Pennsylvania as a prime model in the National Governors Association’s 2019 “Rural Prosperity through the Arts & Creative Sector” report. 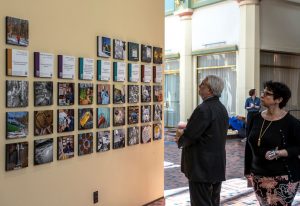 Displayed in the Pennsylvania Capitol East Wing Rotunda Gallery for the month of March, the exhibit featured members of the Wilds Cooperative of Pennsylvania (WCO), a network of hundreds of artisans and place-based businesses from the 13-county region known as the Pennsylvania Wilds. The closing reception brought together around 50 people, including these rural artisans, representatives from various state agencies, and the general public. However, thousands more were exposed to the exhibit over the duration of the display.

Karl Blischke, PCA executive director, noted that the exhibit of images “highlights numerous artisans and their skill and craft in making their authentic and genuine crafts.” He applauded the PA Wilds Center’s foresight in “recognizing the cultural and economic impact of Pennsylvania Wilds creative makers.”

Blischke read a number of statistics gathered from the U.S. Bureau of Economic Analysis’s 2016 Arts and Cultural Production report to illustrate his point: $23 billion is added to the Commonwealth’s economy from the arts sector, 175,000 are working in the arts, and $11.2 billion is earned by these producers.

Blischke pointed to the achievement of the Pennsylvania Wilds being cited by the National Governors Association’s report, which is described as a new action guide that “offers research insights and lessons learned from states that are harnessing the power of the arts to drive rural prosperity.” This was the second time in 2019 that the work of the Pennsylvania Wilds Center was highlighted in a national study. In February, the Appalachian Regional Commission released its “Strengthening Economic Resilience in Appalachia” report, which looked at McKean County and the broader Pennsylvania Wilds as a case study “to understand how coal-impacted communities can transform and diversify their economies and build resilience against future economic shocks.”

“Thank you for helping these creative makers bring their products to market,” Blischke said, adding that creative makers and workers are a key part of the economy. “We should champion the state’s creative sector.”

The Creative Makers of the PA Wilds Exhibit has been a three-year effort by the PA Wilds Center, a nonprofit that has a mission of marrying conservation and economic development in a way that inspires the region’s rural communities. In practice, this work sees the nonprofit simultaneously promoting the lifestyle brand of the Pennsylvania Wilds as a premier outdoor recreation opportunity and working directly with hundreds of small businesses, artisans and producers that are tied to the landscape. The goal is to help these businesses, members of the WCO, to grow, find new market opportunities, and to ultimately stimulate local economies. This exhibit seeks to showcase the efforts of rural makers, bringing private processes to public spaces.

“My staff and I are proud to be building rural Pennsylvania’s largest network of creative entrepreneurs and makers. These folks influence our regional brand and visitor experience in a unique and powerful way and make our towns and villages more vibrant. They are an economic force in their own right – businesses in our network created 82 jobs over the last two years. And they also make our rural communities and the major employers there more competitive,” said Tataboline Enos, executive director of the PA Wilds Center.

“If you know the Wilds – it’s the size of Massachusetts, but only four percent of the state’s population calls it home.  A lot of our makers make their stuff out of the public eye. We needed to capture it,” Enos said. She credited Managing Director Abbi Peters for taking the idea and turning it into reality, with the exhibit now featuring 49 artisans, nearly 200 images strong, and growing.

“Abbi Peters has a unique perspective and skill set for creating vehicles that help elevate and ultimately monetize the arts, which is an often overlooked economic powerhouse for the state,” said Enos.

Enos then read a statement from First Lady Frances Wolf. “By increasing awareness of artisans and craftspeople in the area, PA Wilds Center helps stimulate local economies, inspire stewardship, and create a cultural destination that celebrates the beauty of the commonwealth. I am certain that the creative makers involved in this exhibit will continue to inspire others for many years to come,” Wolf said.

When PA DCNR Secretary Cindy Adams Dunn approached the podium, she challenged the crowd to close their eyes and imagine the Pennsylvania Wilds: the water, the place, the beauty – a few hours away from busy Harrisburg.

“The place … is an important part of why the economics work for the creative makers,” Dunn said. She noted that flagship visitor destinations like the Elk County Visitor Center and Kinzua Bridge State Park Skywalk provide great opportunities for makers to grow their markets based on place. “The beauty of these jobs is that they’ll never be outsourced to China. The people are embedded in this place.”

Carrie Lepore, Deputy Secretary for Marketing, Tourism, and Film at the PA DCED, also spoke to the power of the Pennsylvania Wilds. “It is so amazing to me what has been accomplished in such a short amount of time. The Pennsylvania Wilds is a known entity and a point of pride.”

It helps fund education, infrastructure, and other programs vital to citizens of the Commonwealth, she said.

“Investment in this industry is not an expense. It’s an investment in Pennsylvania’s history, people and places,” Lepore continued, pointing to a 3:1 return on investment for tourism spending. Looking at the exhibit around her, Lepore said the images capture “the heart and soul of the region. They reflect the culture and personality of the Pennsylvania Wilds.”

“I want to thank each of you in this room for your role in our work, from the makers in their studios to the policymakers in Harrisburg,” she said. “It’s wonderful to know that together we can connect not only these people in their communities, but to the larger marketplace.”

Bringing some of the images to life, the reception included light refreshments made by food artisans from the Wilds Cooperative of Pennsylvania who were featured in the exhibit, including maple-covered pecans and cashews from Miller’s Purely Maple and pretzel bark from Highland Chocolates, both out of Wellsboro, and coffee samples from Alabaster Coffee Roaster & Tea Co. of Williamsport.

To learn more about how your organization can contribute to the strategic effort to grow our region’s nature and heritage tourism industry, email Ta Enos, Executive Director. [tenos@pawildscenter.org]

For more information about how to join The Wilds Cooperative of PA, our core business development program, contact LaKeshia [lknarr@pawildscenter.org].

Downloads of the PA Wilds Design Guide are available on this site for free. For other inquiries about the Design Guide, contact Jodi [jbrennan@clearfieldco.org].

For information on where to obtain PA Wilds branded tshirts, hats and other products wholesale, or to apply to use the PA Wilds logo on saleable or non-saleable items, email Carol [cszymanik@pawildscenter.org].

To learn more about how to bring our entrepreneurship programming to your school, classroom or event, email Carol [cszymanik@pawildscenter.org].

For information about how to nominate a champion from your area, contact Carol [cszymanik@pawildscenter.org].