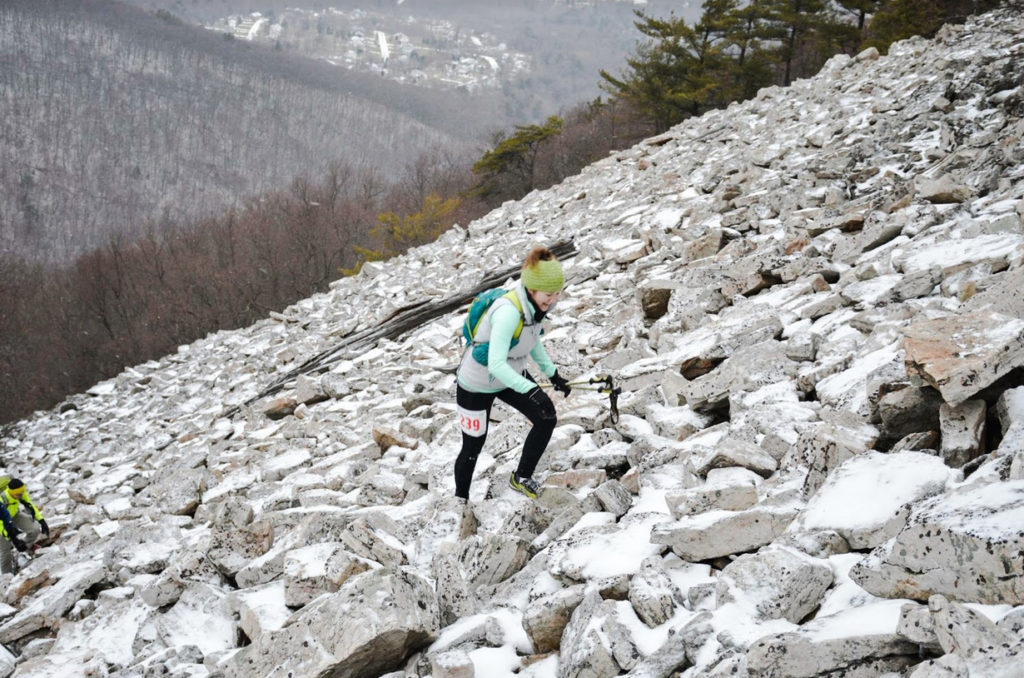 On Jan. 28, over 200 people took to the merciless mountains of Clinton County in the PA Wilds for “The Frozen Snot.”

I was one of them.

Dubbed a “frigid adventure race,” the event boasts of one of the hardest 8.3 mile courses in Pennsylvania,  and debatably the nation.

If you’re truly insane, you can do the full 13.5 mile course. I’m not there yet but I’m already prepping for next year. 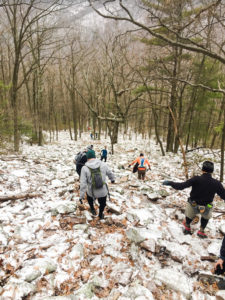 Runners have an easy one mile jaunt on backroads before encountering the toughest climb on the course — a one mile, 1,100 foot ascent through a boulder field known as Barb’s KMA (feel free to Google what KMA stands for).

The trail race is a grueling uphill battle and downhill balancing act which boasts of nearly 4,000 feet total elevation gain on its short course (and over 5,600 on the long course).

Those partaking in the mountain epic have varying finishing times with the long course winner coming in at 2 hours 43 minutes and the final finisher coming in at over 8 hours.

I found myself collapsing at the finish line, fresh from the short course, in just under 5 hours and second in my age group.

The best and most seasoned runners agree that there’s truly only a few miles in the valley —where you’re hopscotching across multiple stream crossings— that you can open up full stride.

Aside from the tough terrain, it’s held on what is typically the coldest day of the year.

We were blessed with only a fine dusting of snow, however veterans recall others where the mountains were slathered in ice or pounded days before with heavy snow.

As you hand over your registration fee months before, the race directors warn you it won’t be cancelled unless the governor himself declares a state of emergency for Clinton County. 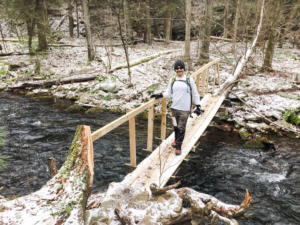 They’ll also tell you that you can’t cross the start line wearing anything cotton because of the risk of hypothermia and that you must have microspikes (basically like tire chains for running shoes). Poles are also advisable if you want to stay upright.

Its awfulness is what makes it wonderful.

The race sold out this year, which means I’m not alone in that feeling.

I’ve only run trails for about one year and I have a lot to learn.

But even though I set out from the start line knowing I’ll never win, there is a certain satisfaction in conquering something that is nearly inconceivable in its absurdity.

I do this because I can.

And I do this because every time I test myself physically, mentally and emotionally I learn something on the trail.

That’s mostly thanks to the people out there.

There’s the selfless (and possibly sadistic) people who spend countless volunteer hours to plan and prep the worst trails out on Bald Eagle Mountain.

There’s also the amazing race day volunteers who climb these same mountains with love, cowbells, bottles of water, and cameras. They start fires to warm you, cheer you on when you’re at your worst, document your moments of accomplishment, and track bib numbers to assure we all get back safely.

It’s also about the serendipitous conversations with complete strangers on single track trails that help you to power through the struggle.

The trail has as much of a story as those on it.

This year, at mile five, there was a memorial for Pastor Dave Bish of Tri-County Church in DuBois, Clearfield County, who collapsed there last year after suffering a heart attack.

On a tree, his smiling picture was pinned. Runners left rocks at the base of it in his honor, while those in a bigger hurry reached out to gently touch its trunk whilst bowing their heads.

Those boulder fields are a proving ground of growth, challenge, and fearlessness.

And it’s likely the hardest thing I’ve done, aside from those 30 hours spent bringing my beautiful daughter into the world.

This race will humble you.

And then have you asking for more.

It’s known for some of the hardest trail races in the Wilds as well as hang gliding, ATV trails, and premier trout fishing streams.

But they haven’t cornered the market on adrenaline rushes and rugged outdoor challenges. These opportunities exist all around the PA Wilds.

Just get out and explore. 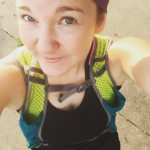 Katie is an adventure mom, trail runner, photographer and award-winning journalist hailing from the rugged and gnarly mountains of Elk County. A fierce advocate of the PA Wilds, she can most often be found on back roads chasing the most wicked, weird and wonderful exploits the region has to offer. Follow her on Twitter @k8isgr8ful