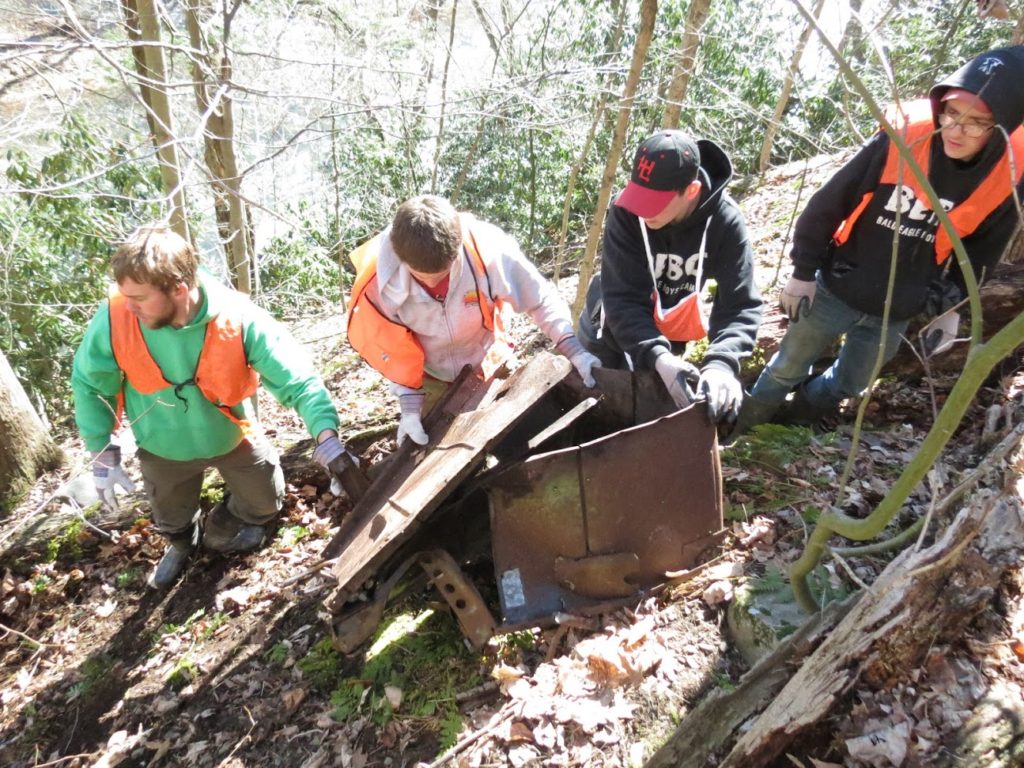 Saturday, April 8 was a special day for Clinton County CleanScapes, a nonprofit organization whose mission is to help communities clean up waterways and landscapes. Fifty-four volunteers turned out to rural Chapman Township, Clinton County, to participate in the Young Woman’s Creekside Beautification Day – and I was one of them! It was the nonprofit’s 110th cleanup since it was formed in 1999, and I couldn’t think of a better way to celebrate Earth Day with folks around the planet than to reflect on the group’s immense impact on the environment and to encourage everyone else to get outside and take part in this much-needed restoration effort. 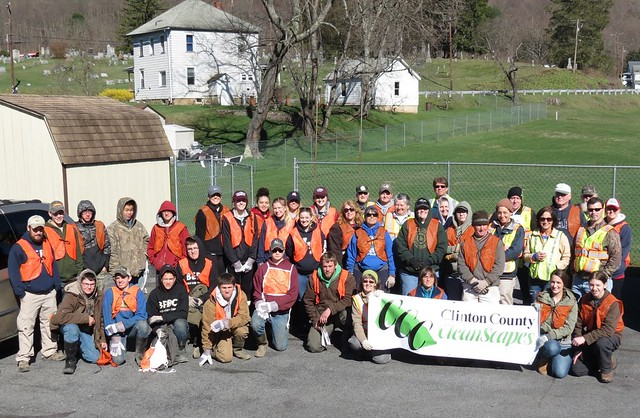 (Photo Slideshow Credit: Dr. John Reid) Volunteers included seven students from Lock Haven University, 10 youth and two chiefs from the Bald Eagle Boys Camp, six folks from Chapman Township, and 29 community members. Armed with trash bags, gloves and donning orange vests for safety, the crew met around 10 a.m. and we set off for Young Woman’s Creek. We spread out over the rocky hillside, creating a staggered line so bags of trash could be passed up the steep embankment, and removing debris as we went – including bottles, cans, bagged deer carcasses, buckets, cushions, seven tires, metal fencing, a lawnmower and more.  After only two hours of working together, the total tally of waste collected for the day weighed in at 1.2 tons (2,460 pounds).

It was an honor to take part in the event and experience the effort firsthand – and especially at this particular location, which CCC Director Elisabeth Lynch McCoy described as one of the worst illegal dumpsites in Clinton County.  The April 8 cleanup changed that – and the CCC and Chapman Township have plans in the works to prevent future illegal littering at the location. The goal is to install guide rail so vehicles can no longer pull off the road to dump trash there.

According to McCoy, the goal of these events is to give the community members an opportunity to clean up abandoned dump sites and take back their environment. She said studies have shown that removing larger dump sites decreases tolerance for illegal dumping, and that helps keep communities clean and safe long-term.

Young Woman’s Creek is a beautiful waterway, often used for fishing, canoeing and kayaking. It runs through Susquehannock State Forest and the village of North Bend into the West Branch Susquehanna River. Just a few miles from Hyner View in the eastern part of the Pennsylvania Wilds, recreational opportunities abound in the vicinity, from hiking and birdwatching to ATV trails and more. The cleanup was inspiring, seeing so many people come together on the shared mission of cleaning up the hillside after what appeared to be decades of illegal trash dumping. These people care about the community, the environment in which they live and others utilize for recreation, and they want to prevent it from being ruined in the future. They are stewards of their community and the land – as we all are.

Volunteers at these events demonstrate the common proverb: many hands make light work. Together we worked to create an environment at Young Woman’s Creek that is both healthy and enjoyable for wildlife, locals and visitors. You can make an impact too, and find ways to love your mother, Mother Earth, by seeking out ways to get involved with local cleanup efforts in your community.

Since the CCC’s inception, hundreds of volunteers have joined in the work and have helped remove over 1,199 tons of debris from the landscapes and waterways of Clinton and Lycoming counties.

Additional CCC cleanups are planned in Clinton County: May 6 at the Rail Trail hillside in Castanea Township; July 22 at Bald Eagle Creek; and Sept. 9 at West Branch Susquehanna River. Learn more at facebook.com/ClintonCountyCleanScapes.